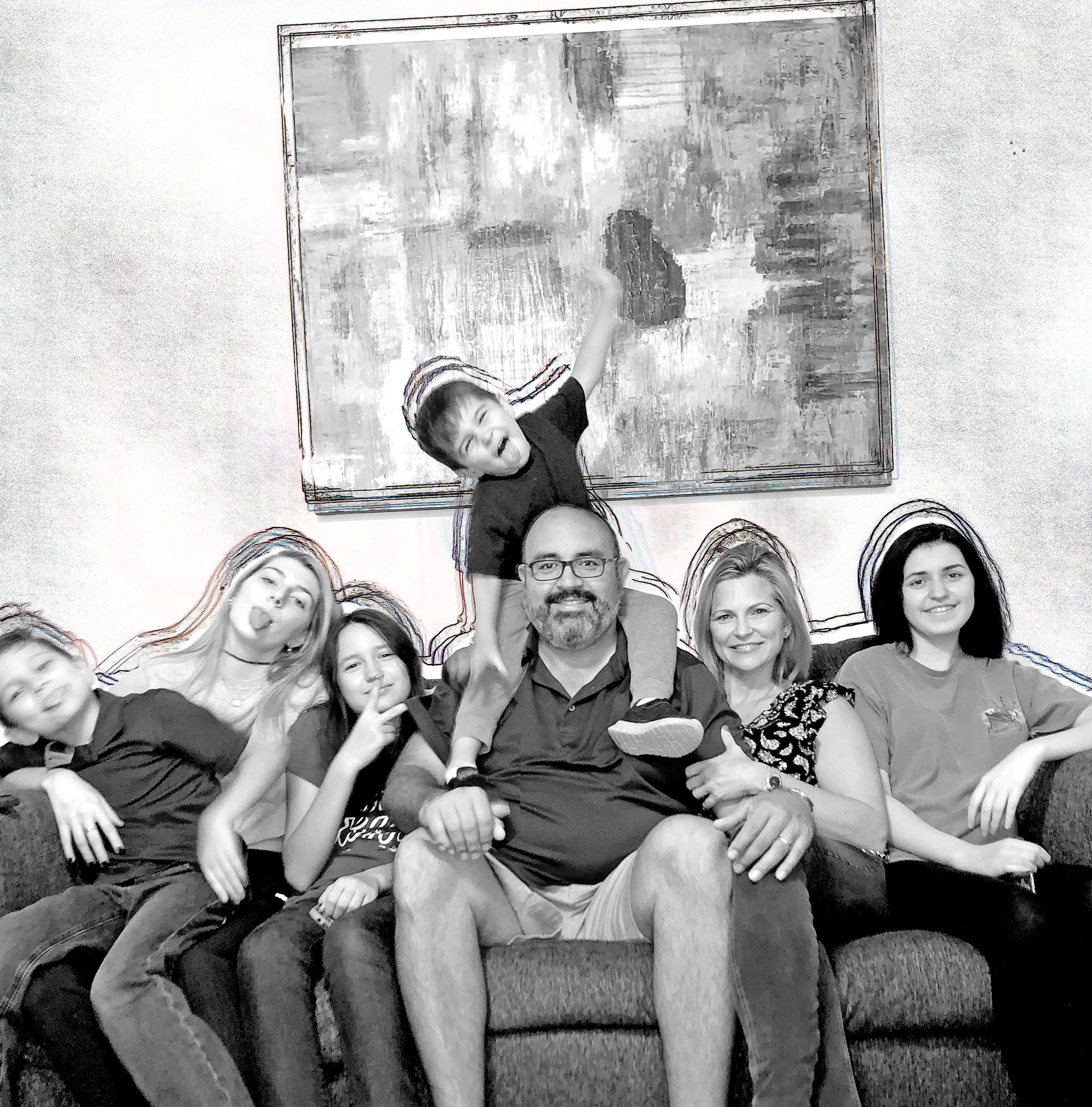 To look at Gabriel and Monica Sanchez is to observe a beautiful, loving couple approaching thirteen years of marriage this October.  It is clear to all who know them that they are active in church, deeply in love with one another, and devoted to their five children.  However, this wonderful and even ideal family portrait was far from achieved overnight.  Rather, it has been a step-by-step journey of choices, fueled by the expansive grace of God.

When they met at a single-parenting class in 2005, Gabriel and Monica each had a daughter from their previous relationships.  After a painful divorce which brought much alienation between Gabriel and his home church, he had no plans to ever marry again.  Monica had finally thrown up her hands to heaven in frustration, letting God “off the hook” concerning the task of introducing her to the right man to marry.  Instead, she informed God that she would simply focus on being a good mom to her young daughter.  Looking back on this time, Monica says, ”Surrender has been a constant in my life.  I’ve had to learn how to surrender.  Really letting God take control and surrendering my life to him.  And it started with just saying, ‘Okay, I’m gonna be a good mom.’  What a concept!”  Within a month of this relinquishment, she and Gabriel met one another.  Five months after meeting, the two were married.

It was less than six months into the marriage when Gabriel discovered something about his new wife that she had managed to keep hidden: his bride was an alcoholic.  Monica knew by the age of 23 that alcohol was a serious problem in her life, but like many, assumed that eventually she would be able to take control of the problem on her own.  Now here they were, only six months in to a union which held so much promise, considering whether or not their official promises to one another could be upheld.  “At that point in our marriage,” Gabriel remembers, “either one of us could have put our hands up and said, ‘This is too hard to deal with.  I didn’t sign up for this.’ ”  In what would typically be a honeymoon season for most couples, Gabriel and Monica instead found themselves in AA and Alanon classes.  The road ahead to recovery was daunting, and Monica asked Gabriel why he decided to stay when so many would (understandably) have left.  His response would set the course for many future decisions that the two would make regarding each other and their children.  He said that he looked into Monica’s young daughter’s eyes and decided he couldn’t leave because of her.  Concern for a little girl who barely knew him revealed the heart of a man who was leaning in close to hear the Holy Spirit’s tender voice.

Although the miracle of recovery proved to bring them closer over time, the situation was still difficult and delicate.  Like so many, Monica struggled with relapsing.  By the time the decision was made that she needed to check into a full-time rehabilitation center, they had grown to a family of six.  Gabriel chose to stay home with the young children and still managed to bring in income while Monica recovered.  Without a trace of bitterness, Gabriel states, “The kids were so understanding, and so willing to accept the circumstances.  They leaned on each other.  They do a lot more for us than we do for them.”

Monica, who says she felt God’s love and protection even in the midst of her addiction, also recognizes how becoming a parent has shaped her view of God.  “He wants the best for me.  He wants to love me with every ounce of His being.  He wants to raise me up to share the love of Christ with everyone.  I would step in front of a car in a heartbeat to save my kid; I understand that that’s how much God loves me.  He sent His son to die on a cross for us.  That’s amazing, but that’s what I would do for my kid.  It helps me understand our relationship better.  He wants to go find that one sheep from the 99, because He doesn’t want to be away from any of His children.”

Church is an indispensable part of life for the self-titled “Sanchez Crew”, which today is a family of seven.  As a blended family that also deals with addiction, church had previously been a place where transparency felt like too great a risk.  After years of struggling to find a church home, they walked in to what Monica lovingly describes as the “beautiful, messy community called Mercy Street”, where heart health and recovery matter more than title and income.  She says, “Here, we don’t have shame.  We come as we are, and we’re accepted as we are.  And I think that’s what Mercy Street really does well.  Everybody knows that they’re loved, right where they are, and that’s huge.”

The kids have also found a home among the Mercy Street youth.  If Monica and Gabriel attend a seminar or class at any other church, their 11-year old makes sure to remind them, “Y’all know this is just temporary, right? We go to Mercy Street.”  For Gabriel, the fact that his children feel accepted within the church is vital.  “The kids know they are loved,” he says.  “Monica and I come to Mercy Street because we know that we’re loved.  It’s the type of community that I think Jesus would be sitting in.  When I reflect on the stories in the Bible, the people that Jesus spoke to, sat down with, and as Melissa has mentioned in her sermons, was the most intimate with, are people that were broken, and people that were working on things.  Normal, everyday people who went through stuff.  And that’s a reflection of our community.  We come here as a reminder that we’re loved.”

Part of being “normal, broken people” for the Sanchez crew is learning how to put family first.  Gabriel acknowledges, “It’s something that took a lot of work, and that really evolved over time.  We had to say, ‘We are a family, and we’re going to make this work.’  We made a decision to be a unit, and to be together.”  This decision means doing whatever it takes to make family time happen, even with hectic schedules.   For Monica, decidedly an extrovert, this can be difficult.  Wanting to do everything and yet saying “no” has been a deliberate choice.  “It’s tough sometimes, but then it’s not tough, because I need to be with these little people,” she says.  “Actually, I get to be with them.  So we have to put it in perspective.  One day at a time.  We’re here right now, and this is our role.  We’re called to be parents that train their kids in the ways of the Lord, for this current season.  I embrace that today, where before, I might not have.”

Understanding how to be a blended family was a slow process, and also far from easy.  Compromise, parenting strategies, and learning how to communicate took time and tears, but was well worth the investment.  Gabriel remembers, “It just came down to making a decision. Standing for your family, and putting it in God’s hands.  God allows us to take it a day at a time, and not worry about what could happen.  Cause it’s a journey, right?  Anything could happen— Monica could relapse, I could get sick... It’s just knowing that God blessed us with today, and that He’s gonna take care of tomorrow.”

Monica and Gabriel also stress the importance of getting out and doing fun things as a family that build character.  Big experiences such as going tubing over the summer, and smaller events such as “Friday night popcorn and movie time” create  intentional space for the Sanchez crew to bond with one another.  Gabriel looks to the example of his children in regards to his own relationship with his heavenly Father.  “Our kids reach out and want to take us by the hand, and that’s what we need to do with God... Take God by the hand and let Him lead.”

The gravity of these particular circumstances could easily capsize the best of relationships.  Instead, thirteen years later, Monica still gushes over Gabriel with such sincerity and affection that those around them long to know the secret of their connection.  “I can’t say enough wonderful things about my husband,” she smiles.  “He’s amazing.  I definitely hit the jackpot.”  Clearly he stands ten feet tall in her eyes, and the admiration goes both ways.  “I married up as well, so don’t give me all the credit,” he smiles back.

This is not the result of lucky chance.  It is not the bird of happiness landing on your windowsill.  It is not just some miracle that falls together in your lap.  Rather, it is waking up every day and making a choice.

“I’m not going to drink today.”

“I’m going to spend time with my kids today.”

It is days and days of making decisions, built up over time, slowly becoming a solid foundation— a home.  It is choosing to invest in and put others first from Monday to Thursday that leads to “Friday night popcorn and movie time” that you actually anticipate.  It is how divorce, rejection by the church, addiction, recovery, and sometimes painful family growth can become the beautiful portrait of the Sanchez Crew that we see today.  It is when, like a child, we take God by the hand and let Him lead.