A little girl, a Chapelwood art project, and a letter received years later show how God works in wondrous ways . . .

For a very long time I wasn’t a good guy. I drank and I stole, I lied and I cheated – all of which contributed to me spending the biggest part of my adult life in prison.

So began a six-page handwritten letter from a Texas prison inmate named Thad in Huntsville received by Chapelwood member Fred Lowe. Fred participates in a part of Chapelwood’s prison ministry called Kairos, which takes spiritual encouragement, discussion, support, and several delicious meals inside the walls of prison to inmates who choose to participate. While the food is almost certainly responsible for the attendance of some, by the end of the program the inmates return to their cells with much more than just a full stomach. They leave the program knowing that there are people on the outside who have not given up on them and that God has not given up on them, either.

In August, Fred was at the Walls Unit in Huntsville when Thad, who had attended a Kairos walk in 2011, gave his testimony to those in attendance. Fred listened, and then asked Thad to write down his story so it could be shared with the outside world. Parts of that letter, and the story behind it, are shared with you today.

That first day of the Kairos walk I wasn’t really sure what to expect. I wasn’t exactly rude to anyone, but I was very cold and mean on the inside. I hadn’t felt God’s presence for so long that I started to not even believe that he was real. I was in a very bad place at that time, and was even contemplating suicide. Just because I didn’t believe didn’t mean that I didn’t want to.

In his letter, Thad went on to say that four years prior, while he listened to the Kairos talks and tried to keep an open mind, he felt it was impossible for him to ever be as happy as the volunteers were. By the middle of the program’s second day, it was obvious to him that while other participants were visibly affected, he wasn’t.

And then it was time for supper, and everything changed.

The inmates entered the rooms where meals were served, and Thad walked in, tired and hungry, and sat down without paying much attention to anything.

I’ve read the Bible several times, and I’ve always noticed how God gets people’s attention in some pretty strange ways. Moses had his burning bush – Jonah had his fish – Noah had his thunderstorm. What sat before me was a hand-drawn placemat by a little seven-year-old girl named Madeline. It was multi-colored, and had a bunch of hearts drawn on it, but what affected me most is what it had to say:

I asked all the guys, “How’d she know about those dad-gum windows?” But later that evening in my cell, it really hit me hard. I knew without a shadow of a doubt that God was speaking to me through this little girl.

Four years later, Thad still has his placemat, drawn by a little girl named Madeline whom he will likely never meet. To him it is a tangible reminder that God loves him and that everything’s going to be okay. He witnesses to others every day, and by his own admission tries to be a good example. Thad is now back in touch with his family, and has even started a Bible study on his wing.

I’ve led men to Christ, and I truly believe that I’ve made this world a better place. And it’s all because a little girl wrote a few lines on a placemat for me. Thank you, Madeline.

And the story would have ended there, except that when Fred read the letter, he remembered that Chapelwood kids provided most of the Kairos placemats in 2011. A chat with wife Donna and a little bit of research led to a Chapelwood eleven-year old named Maddy Fields, daughter of Chapelwood staff member Katie Fields and husband Chris. Could Maddy be “Madeline” – the creator of the placemat?

Donna emailed Katie to ask, sending along a picture of the placemat. Katie’s response provided the answer. In an email to Donna, Katie wrote, “I’m sitting here crying. I cannot believe it. It looks like her handwriting and she says she remembers doing placemats for prisoners. I remember her using a “ck” for all words ending in a “k” sound – long and short vowels. Wow. Just wow. How awesome is our God?”

Maddy was pretty excited to hear that a placemat she made years ago had made such a lasting impact. At the time, it was just a simple activity for young children whose parents were in the 11:10 service. “I don’t even remember thinking that this was a big thing,” she said. “I only remember saying, ‘Do not break windows. When you’re younger, sometimes you don’t realize how big something is, like how big it is that someone died, or someone has cancer. It’s nice to know that they appreciated it. And that you know that you did a really, really big thing.”

Maddy read the letter written by the recipient of her placemat. “That’s awesome!” was her response. Mom Katie agreed, telling Maddy, “I think it’s really cool how God used you to make a difference.”

We think so too, Katie. Thad was right. From a children’s activity in the Fireside Room all the way to a cell in a Huntsville prison, God really does “Get people’s attention in some pretty strange ways.” 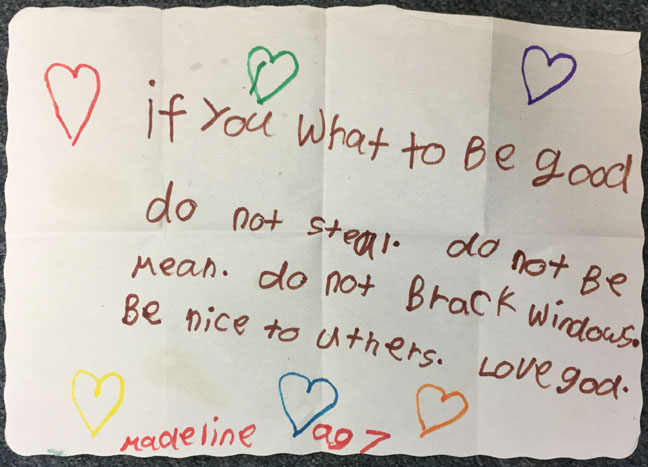