The morning of November 9, a large white truck slowly made the turn from Greenbay into Chapelwood’s west parking lot, easing just past the main Sanctuary doors before pulling gently to a stop. While its trip began in Macungie, Pennsylvania, earlier that week, the full journey of the organ console it carried began more than a year before, one morning in the fall of 2016.

The history of Chapelwood’s Sanctuary organ began long before 2016. In 1971, Chapelwood installed a 41 rank Moller pipe organ. The console was a four manual (meaning four keyboard) console built to American Guild of Organists (AGO) specifications with a pneumatic/mechanical capture system. By the mid-1980s the inner workings of the console had been overhauled, and the Moller Pipe Organ Company added 18 ranks of pipes. Austin Organ Company added a new four manual console to the organ in 1990 with additions by Walker, and the chancel area was expanded with console placement in the center of the choir loft. In 2000, the Reuter Organ Company of Lawrence, Kansas completed some extensive pipe replacement, including the entire Great Division, Swell Reeds, Swell Mixtures and Trompette en Chamade. In 2006, Reuter changed out all of the Great pipes.

However, as it does with any large and complicated piece of equipment, time takes its toll. By the summer of 2016, a wind leak had developed. A bit later that year, a set of stops ceased to function, revealing the cause of some other intermittent problems: rats chewing through the clad cloth wiring.

Then, the week after All Saints in 2016, Chapelwood’s organist Cameron Cody was practicing in the Sanctuary when loud crackling and a shower of sparks came from the pipes above. It was just a “spark fire” – not open flames – but the burned wire throughout meant the organ was unsafe to turn on until the destroyed wiring and switches were replaced, and other damaged parts were repaired.

But the 1980s were a long time ago, and parts for the system that operated the console were no longer manufactured. The organ console had served a good life and was right at the end of its projected lifespan, and so the decision was made to replace it.

Cameron Cody was tasked with the job of developing the specifications for the new console. With his experience playing organs all over the world, he was in a good position to identify the best features of all of them and design a console that would best meet all of Chapelwood’s widely varying worship needs. Craig Gilbert, Susan Hall, and Bob Lindsey joined the discussion making sure the wood and stain chosen would fit in the Sanctuary. The Allen Organ Company was chosen to build the console and install the additions. Allen is the world leader in digital organs and console construction, and fortunately, they were also the best with regard to cost. This organ is guaranteed to last over sixty years. 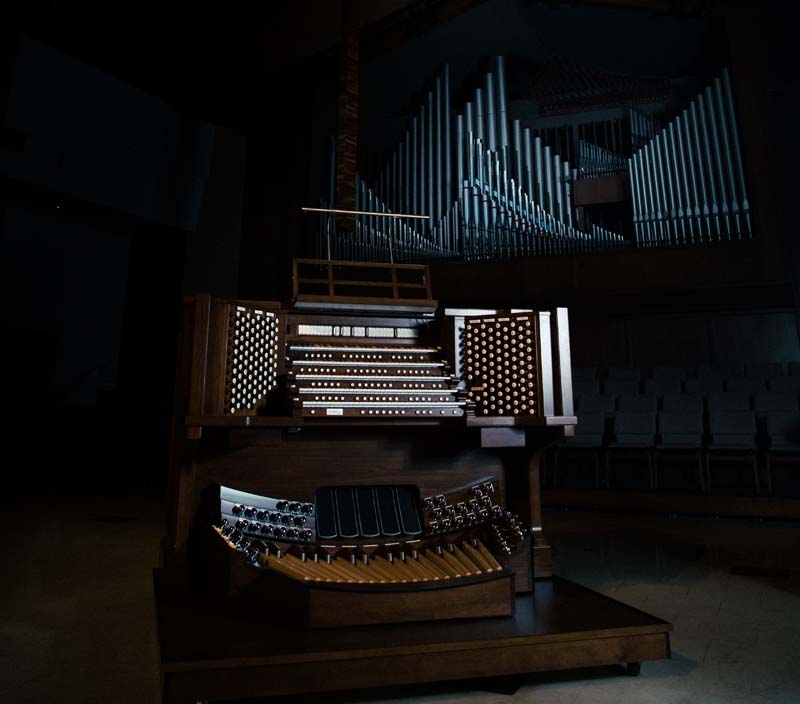 How does the new organ differ from our old one? First, the new console has a fifth manual, or keyboard. It sits at the very top of the console, and plays a new string division. Second, the console sits on a custom platform and so is now much more movable – a benefit for concerts and performances where greater visibility is desired. Third, the antiphonal section of the organ located at the back of the Sanctuary balcony has been expanded. Along with the new string division mentioned above, it has a full principal chorus with pedal and a festival trumpet. This will dramatically change the balcony worship experience when it’s used – as we will now have the equivalent of a full organ in the balcony. Last, and most certainly not least, are all the digital extensions – Chapelwood is doubling its ranks of pipes from 80 to 160. That means roughly 10,000 pipes – both digital and physical. Digital extensions are recordings of live pipe organs sampled, in this case, from pipes in many of the largest and grandest pipe organs in existence. When those notes are played here, the sounds reverberating through the Sanctuary are the exact sounds generated by those other distinctive pipe organs. Perhaps most importantly, the organ now has the capability to produce the sound of any kind of contemporary music, ranging from the organ sounds heard in hard rock concerts, to ballpark organs, to electronic pianos, even replicating sounds not ordinarily associated with traditional church worship, such as rain showers, bird tweets, blow bottles, harmonicas, and much, much more. As Cameron says, “It’s hard to describe because there is just so much.”

But it’s not just about installing new components – it’s also about maintaining what we have. As none of Chapelwood’s organ pipes have had any work performed on them since their original installation, there is a clear need for some loving attention. While organ pipes need less maintenance than do organ consoles, some of our pipes are almost fifty years old, and will benefit from a “check-up.”

Coincidentally, the Fair Haven Sanctuary organ is being replaced at the same time as is the Sanctuary organ on Greenbay. The Fair Haven organ is a smaller “sister” organ – it is laid out the same way, it is the same color – it even has a festival trumpet. One benefit – an organist familiar with one organ would find it relatively easy to shift to the other, should the need ever arise.

Sunday, December 3, saw the new organ played for the first time in worship, and later in December, Carols and Keyboards and The Festival of Sacred Songs provided more opportunities for showing off its greater capacity. Chapelwood kicks off an annual organ series in 2018: February, April, and September will see three organ dedication concerts (stay tuned for details). The AGO can host events here, as well, as this organ is one of the most magnificent in the city.

From a shower of sparks during a practice session to the glorious sounds heard now in worship and concert – all the evaluations, decisions, collaboration, and waiting have brought us one of the finest, if not the finest pipe organ in Houston. Many thanks to the Allen Organ Company and Chapelwood’s music staff, and most of all a sincere thanks to Chapelwood’s congregation for its ongoing support of worship and music.